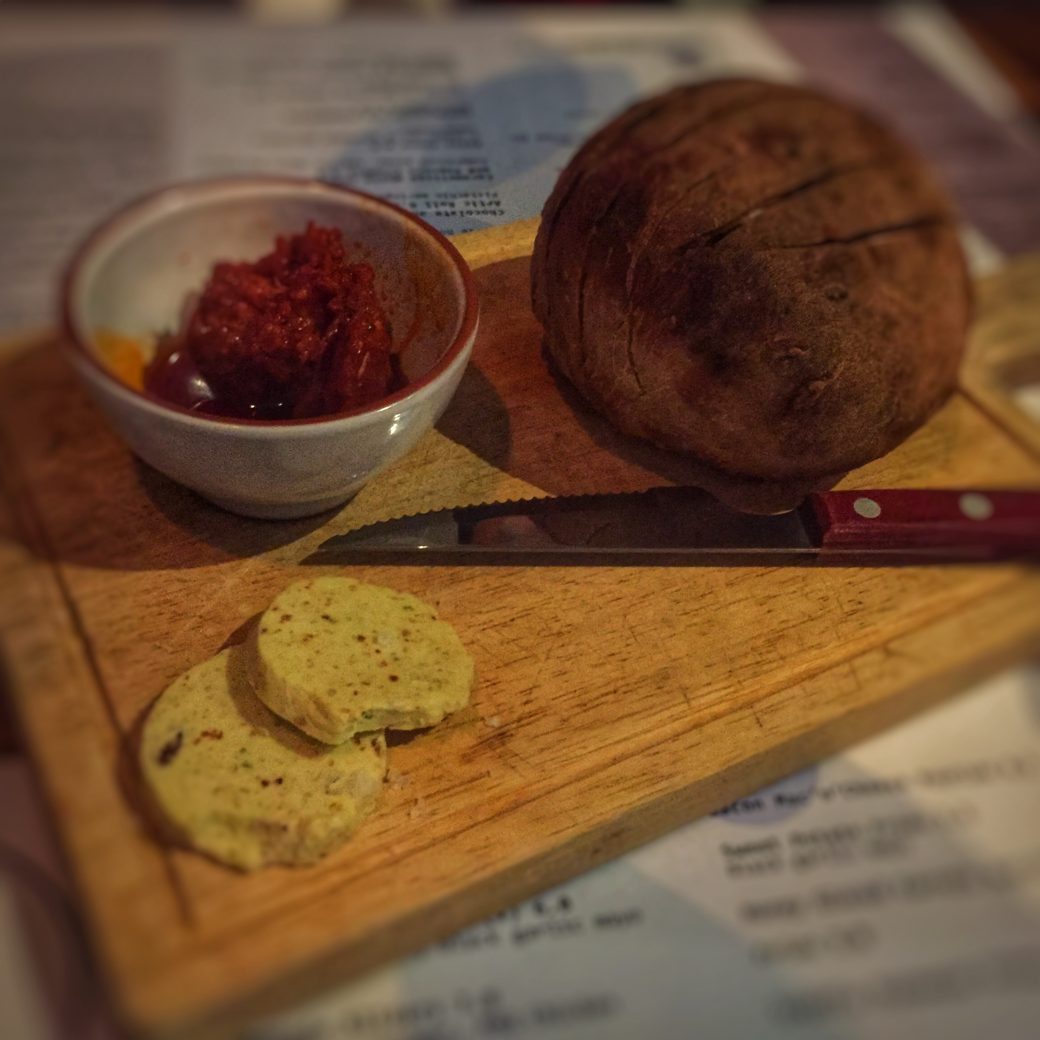 When I decided to start this blog a few months back now, the main reason was to get out and try more of Glasgow’s amazing food scene. Black Dove was one of the first places on my list due to their innovative menu and also their tasting menu which was something I hadn’t encountered much at the time.

So fate smiled kindly on me when a Groupon offer for Black Dove became available and even more kindly when my better half bought it for us. The deal was £13.50 for 3 small plates and one side, we also ordered another small plate, a snack and a dessert from the menu as well as a couple of soft drinks. That was another £20, so £33.50 in total and still great value.

If the Groupon deal was great value then the food was even better. Every dish we had was packed with flavour and although the plates were described as small the portions were actually pretty generous. I’m a big fan of the growing trend for tapas/mezze style dining expanding beyond the traditional cuisines associated with them. 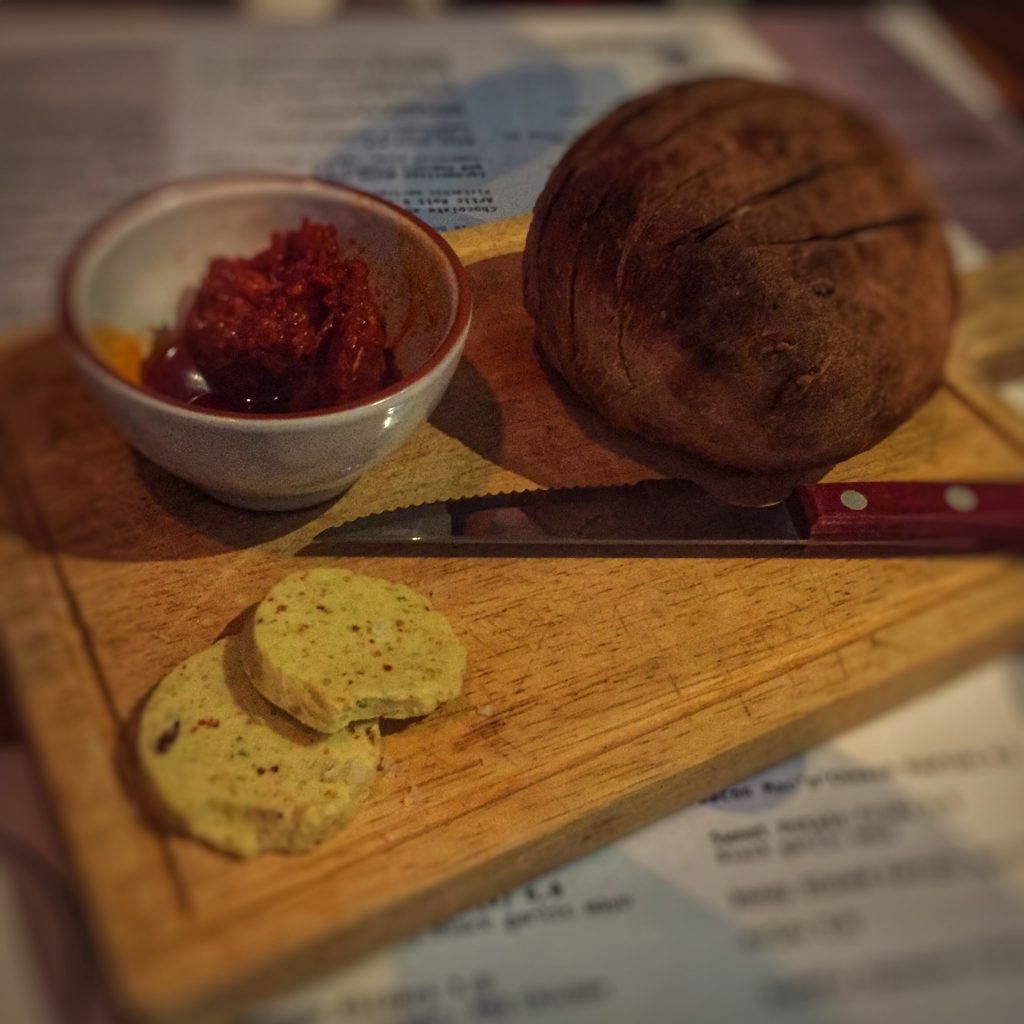 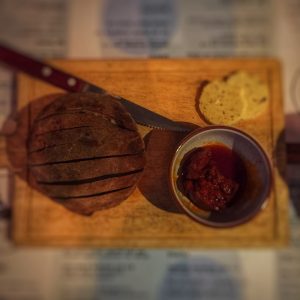 The first dish that arrived at our table was the homemade sourdough loaf we ordered from the snacks section of the menu. This was something special and far exceeded my expectations. The loaf itself was warm and tasted like it was freshly baked from the oven, it was also delicious! It was served with bacon butter, yes bacon butter, and sobrasada which is a raw cured sausage from the Balearic Islands similar to chorizo.

Those who follow my feed and blog will know of my love for bacon and chorizo and, in particular, the innovation that is bacon jam. Well now bacon butter is a thing and I for one am happy for the bandwagon to roll on and bacon to be incorporated into everything.

For a seemingly simple dish I was blown away by the flavours and how they interacted with each other. If you go to Black Dove I recommend ordering this with whatever else you choose. This was definitely the star of the show and I don’t think spectacular even does it justice! 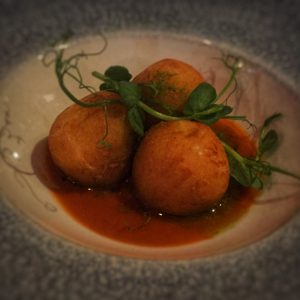 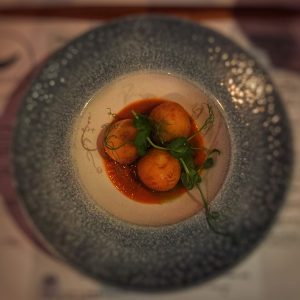 Next up was the spinach and ricotta gnocchi. To say this was my least favourite dish would be true yet a tad unfair. It’s not that I didn’t enjoy it but more that I enjoyed the other dishes more. In itself, this was still a good dish and was a new take on an old favourite of mine. The rocket and lemon pesto was also intriguing and a bit different.

The gnocchi was stuffed, something I hadn’t tried before, and the tomato sauce was smoked, another first for me. The dish was beautifully presented and tasted great, my main criticism of this dish was that there were 3 pieces of gnocchi. It’s a small criticism and perhaps pedantic but when sharing a dish even numbers are so much easier to split. 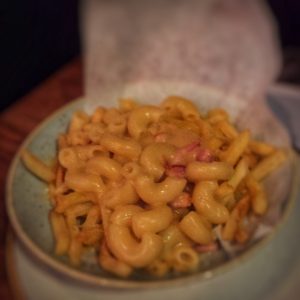 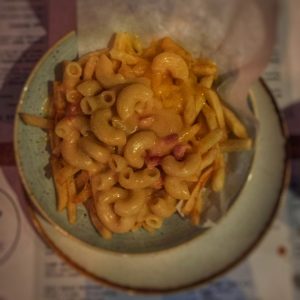 Next up was the bacon mac n cheese poutine, the Ronseal of dishes so to speak as it did exactly what it said on the tin. As soon as I saw this on the menu I knew we would order it. I love poutine, my better half loves mac n cheese and we both love bacon so it was a no-brainer.

This was a great dish, my only small criticism would be that I’d have liked some more bacon but I’m a self confessed bacon nut! The mac n cheese was delicious and the sauce was very very good. A big plus for me though was that the plain fries, the few not covered in delicious mac n cheese, were also very tasty. Would definitely recommend this to anyone who is a poutine and/or mac n cheese fan! 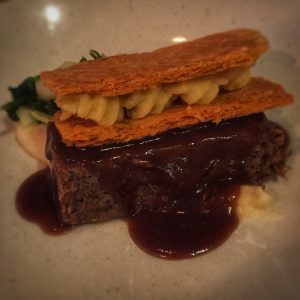 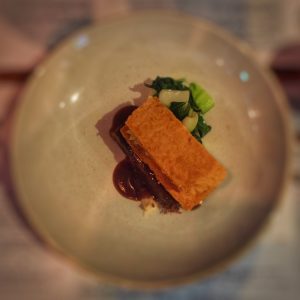 The poutine was swiftly followed by the ox cheek steak pie, another quirky interpretation of an old favourite and classic winter warmer. The steak pie was served with celeriac puree which was unlike anything I’ve had before and complimented the ox cheek perfectly along with the seasonal vegetables.

I admit when this dish came I was slightly apprehensive as it looked like a massive slab of meat. Having already had a few dishes I shouldn’t have been worried as this was just as good as the standard I’d quickly become accustomed too!

The ox cheek was delicious and cooked perfectly, it pulled apart with ease and melted in the mouth. The pastry was light yet crunchy and  encased some delicious whipped mash potato in between. Did I mention the gravy? Sweet lord it was perfect, excellent is the best word to describe this plate. 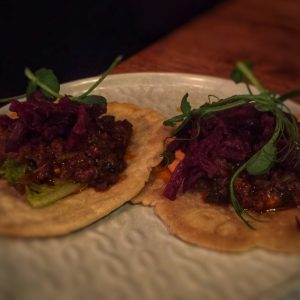 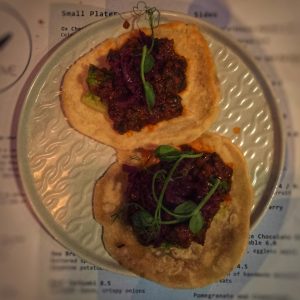 The next dish was the venison and was a close runner up to the sourdough loaf for the star of the show award. This was a tremendous yet simple dish. I say simple as it was tacos but there was nothing simple about the flavours in this dish. The soft shell tacos were great, thicker than your normal soft taco and absorbed all the flavours from the ingredients.

The venison reminded me of a chilli with the seasoning used but was much tastier than anything I’ve ever concocted in the kitchen. Along with the venison there was charred baby gem, harissa yoghurt and pickled red cabbage all wrapped in the delicious soft shell taco.

This was a standout dish and I can’t recommend it highly enough. If you go to Black Dove then this and the sourdough loaf should be top of your ‘to order’ list. 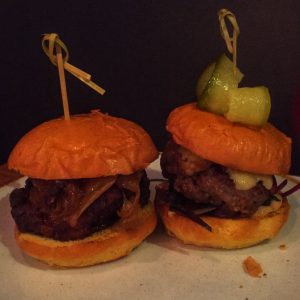 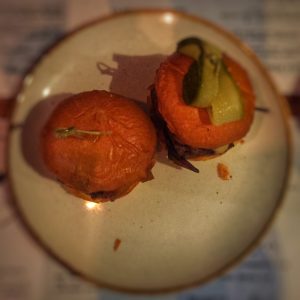 Last but by no means least on the original order was the homemade sliders; one bacon cheeseburger and one BBQ chicken with caramelised onion. It’s not often you’ll hear me say this but the BBQ chicken slider was my favourite of the 2… feels almost wrong picking chicken over beef but there you have it.

If you’re a burger fan or a chicken burger fan then I’d recommend this dish as the burgers were both great and on par, if not better, than some others I’ve had in Glasgow. 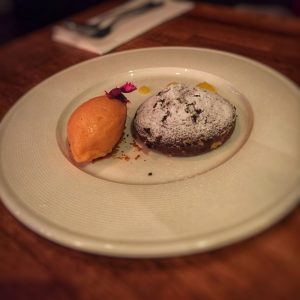 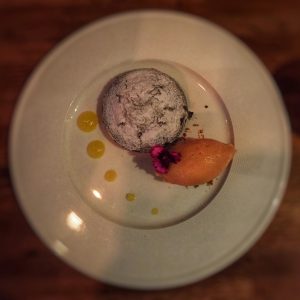 Perhaps against my better judgement we decided on a final dish to share; the sticky gingerbread pudding with hot toddy sorbet. The main reason for deciding to get a dessert was the high quality of the other dishes and that ever present motivator, fear of missing out!

To clarify; the dessert, like everything else, was excellent. After we wolfed it down we were both extremely full and satisfied with a great nights eating. The pudding was sweet and delicious and very light and spongy. I couldn’t fault anything with it.

The hot toddy sorbet was also delicious, it was very light and refreshing after a night enjoying a multitude of flavours and was the perfect end to a perfect meal.

I’m definitely planning on going back to Black Dove; the food, atmosphere and service were all excellent! The southside has really come to the fore recently for me as a destination for great food and Black Dove is certainly a leading light in that regard.