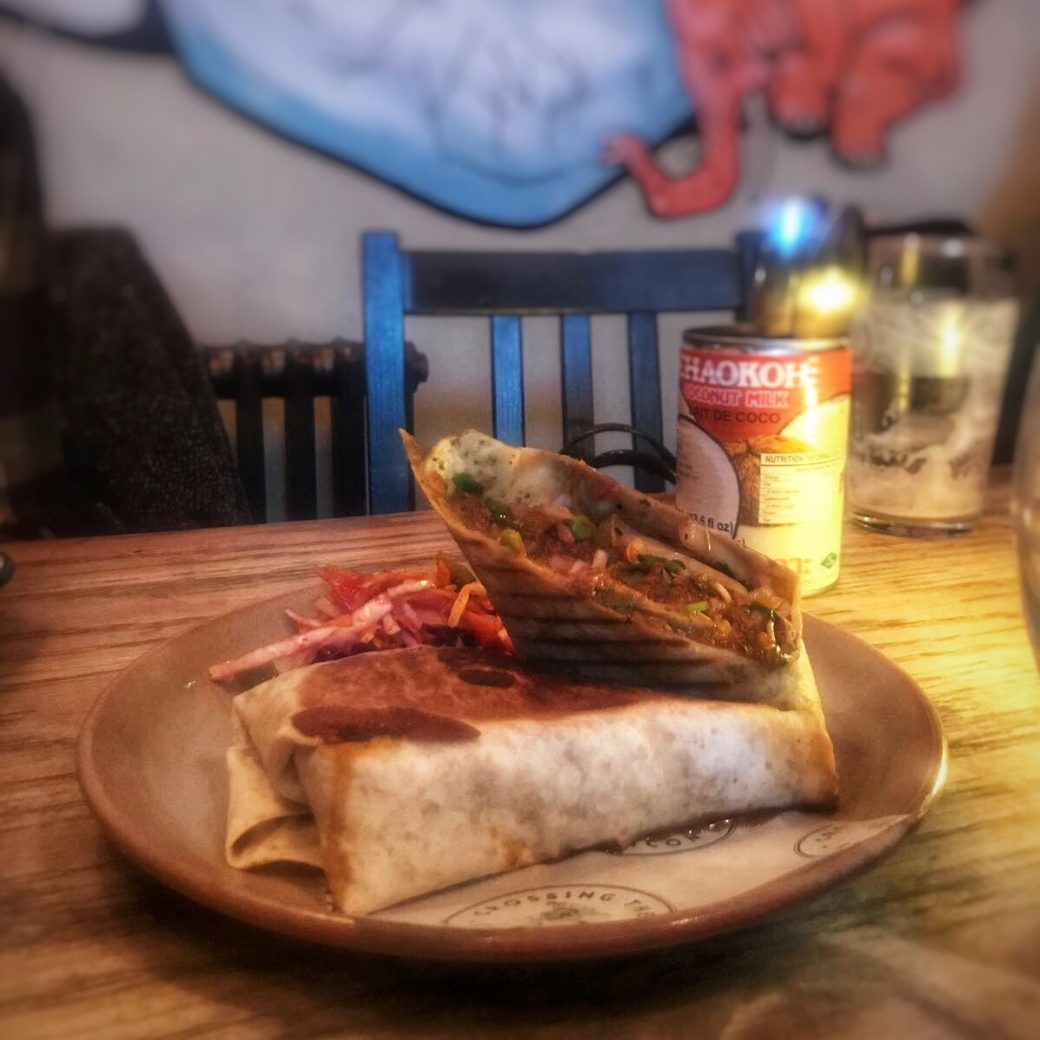 I know what you’re thinking, back again so soon? And with all the food places in Glasgow to go to? I know right, but when a place you enjoyed so much launches a new menu it’d be rude not to pop along and check it out! So here I am, telling you once again about Crossing the Rubicon but this time it’s a brand new menu and a shake up on the usual Indian concept.

While some things have been shaken up some things have stayed the same; there’s still a great beer selection to accompany those delicious plates flying out the kitchen. We’ll come to the food in a mo’ but I always like to just take a second when talking about Crossing the Rubicon to mention the beers. This visit was mostly accompanied by the Tiny Rebel Stay Puft marshamallow porter which is sweet but not sickly and almost acts as a dessert with the food.

But I digress, now we’ve covered off that delicious beer lets get on to the good stuff; the food. The new menu at Crossing the Rubicon has kept some of the old favourites but added some new and unusual dishes. I say unusual only because Indian street food as a concept isn’t overly available in Glasgow. I have a feeling that may change. 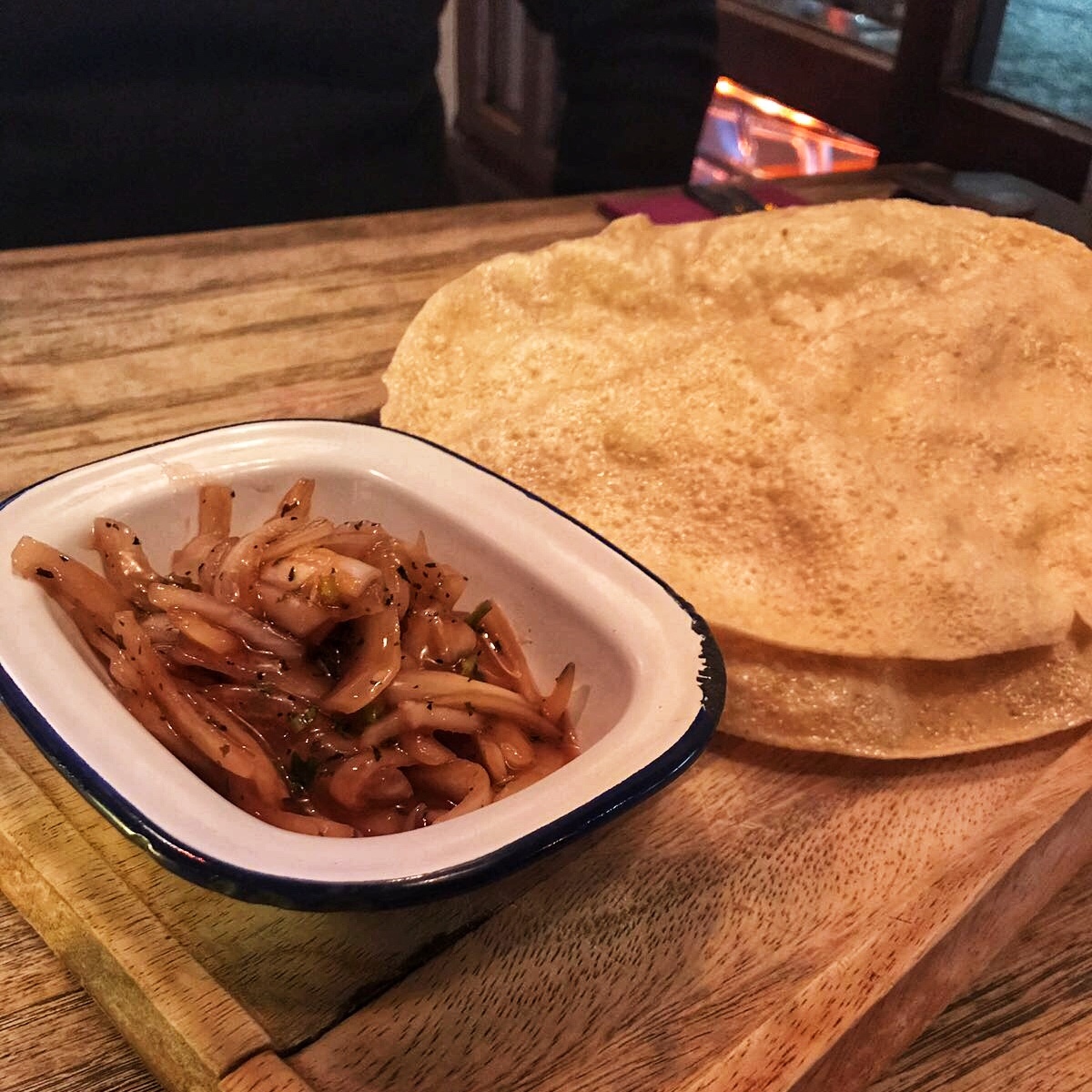 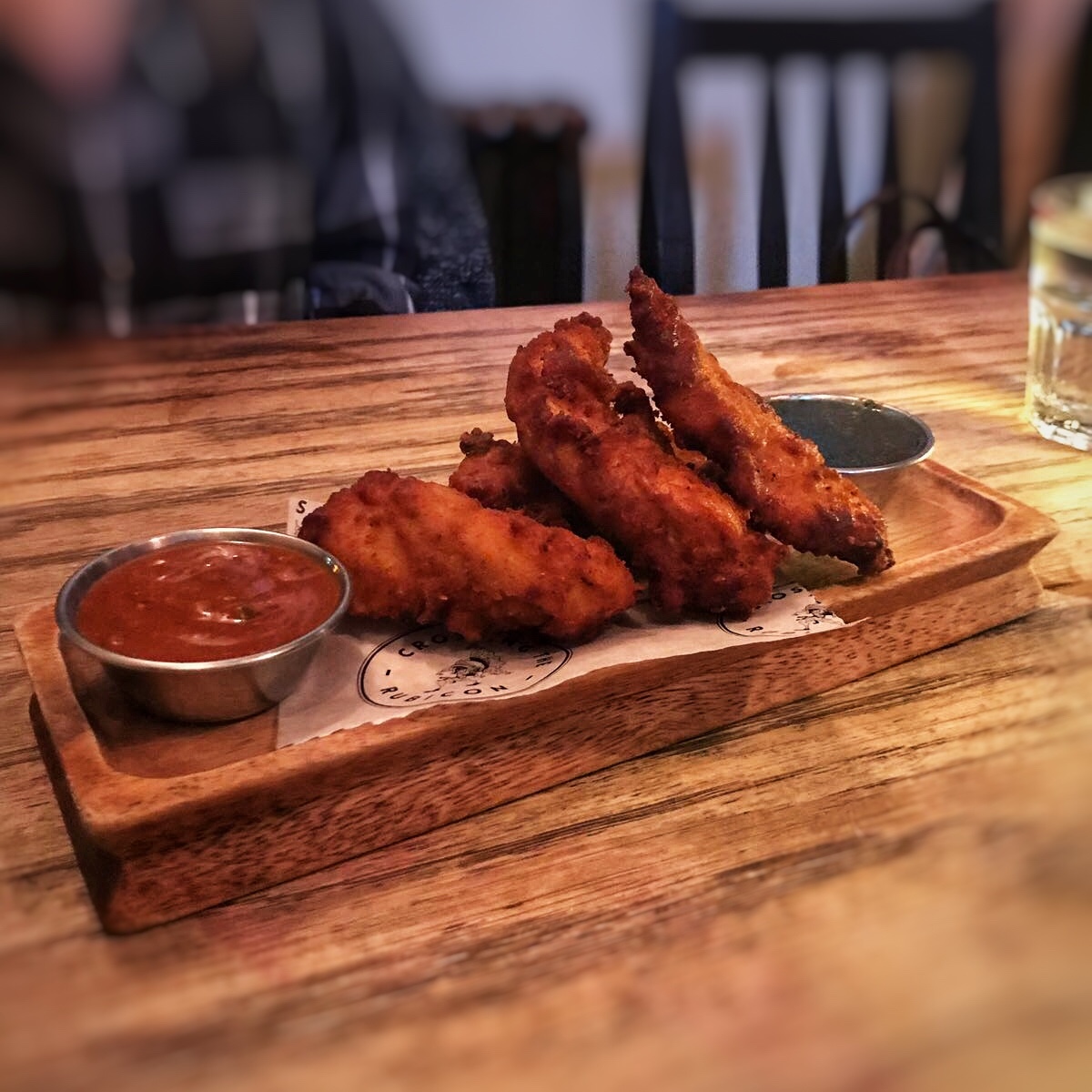 So here’s me banging on about new and unusual dishes and the first thing I show you is spiced onions and poppadoms and chicken pakora; hardly groundbreaking I know. I’m starting simple though and everyone knows it isn’t an Indian meal if you don’t start with spiced onions and poppadoms and for me pakora is a staple of any Indian feast whether it’s out for dinner or from the local takeaway.

Now I won’t dwell too long on the spiced onions and poppadoms, they were delicious but really if a place serving Indian food can’t do those well you really should get up and leave. It wouldn’t bode well for the rest of the food in my book. So yeah, crispy poppadoms; check! Nice spice to the spiced onions; check! Job done.

The pakora though is delicious and definitely worth talking about a bit more. The krispy chicken pops as they are on the menu are some of the nicest pakoras I’ve had anywhere in Glasgow. They’re nice and crispy which is always a good sign when you pick them up and they have a great little spice to them. They won’t blow your head off but you’ll know you’re eating Indian food that’s for sure.

They’re also served with a couple of chutneys to dip them in which are delightful. Usually with pakora, the sauce is the spicy part and the chicken itself can be a bit mild but here the sauces just compliment the chicken and the spices to create an all round great taste. There’s a tomato based one that you’d expect but also a coriander based one which always works well with a spicy meal I think. 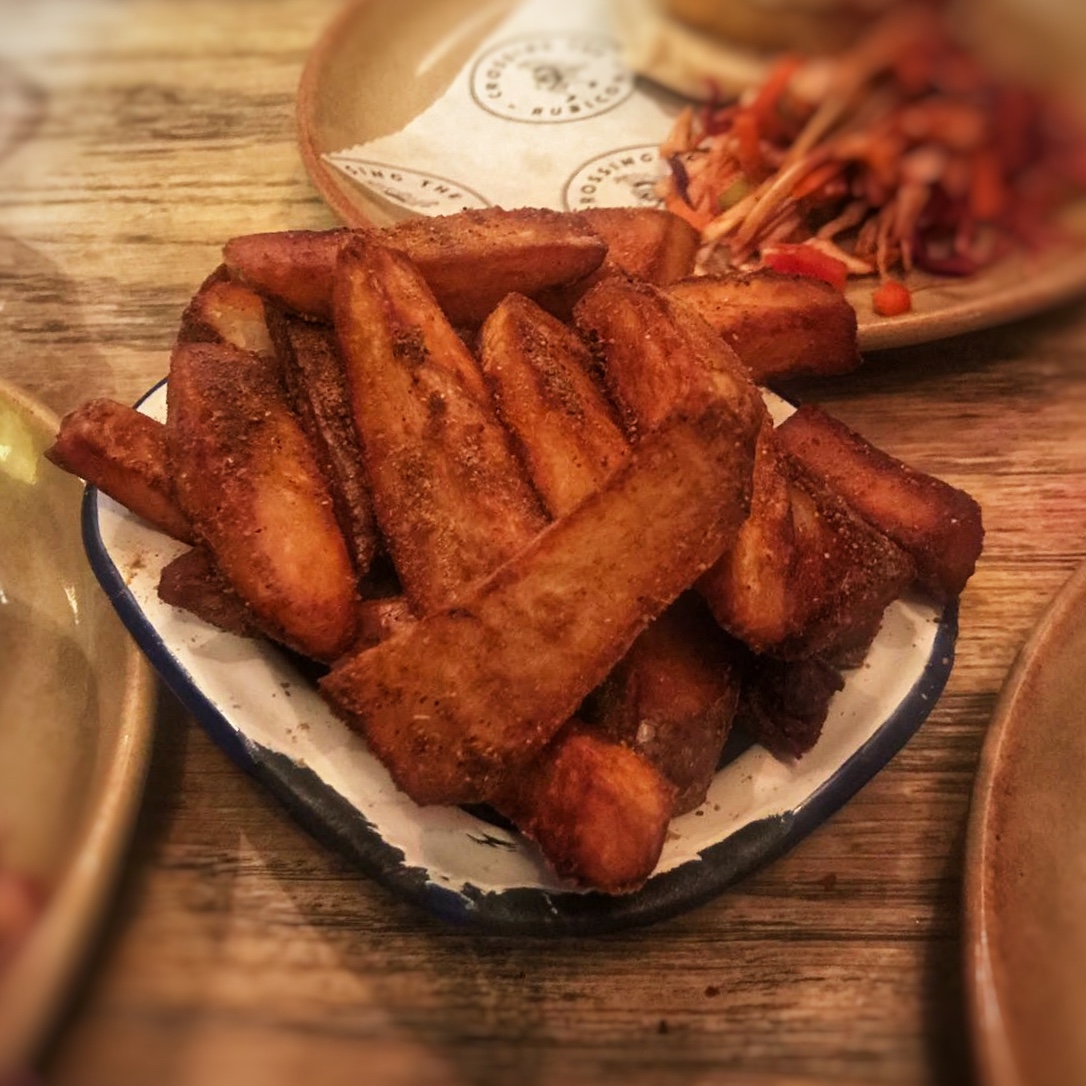 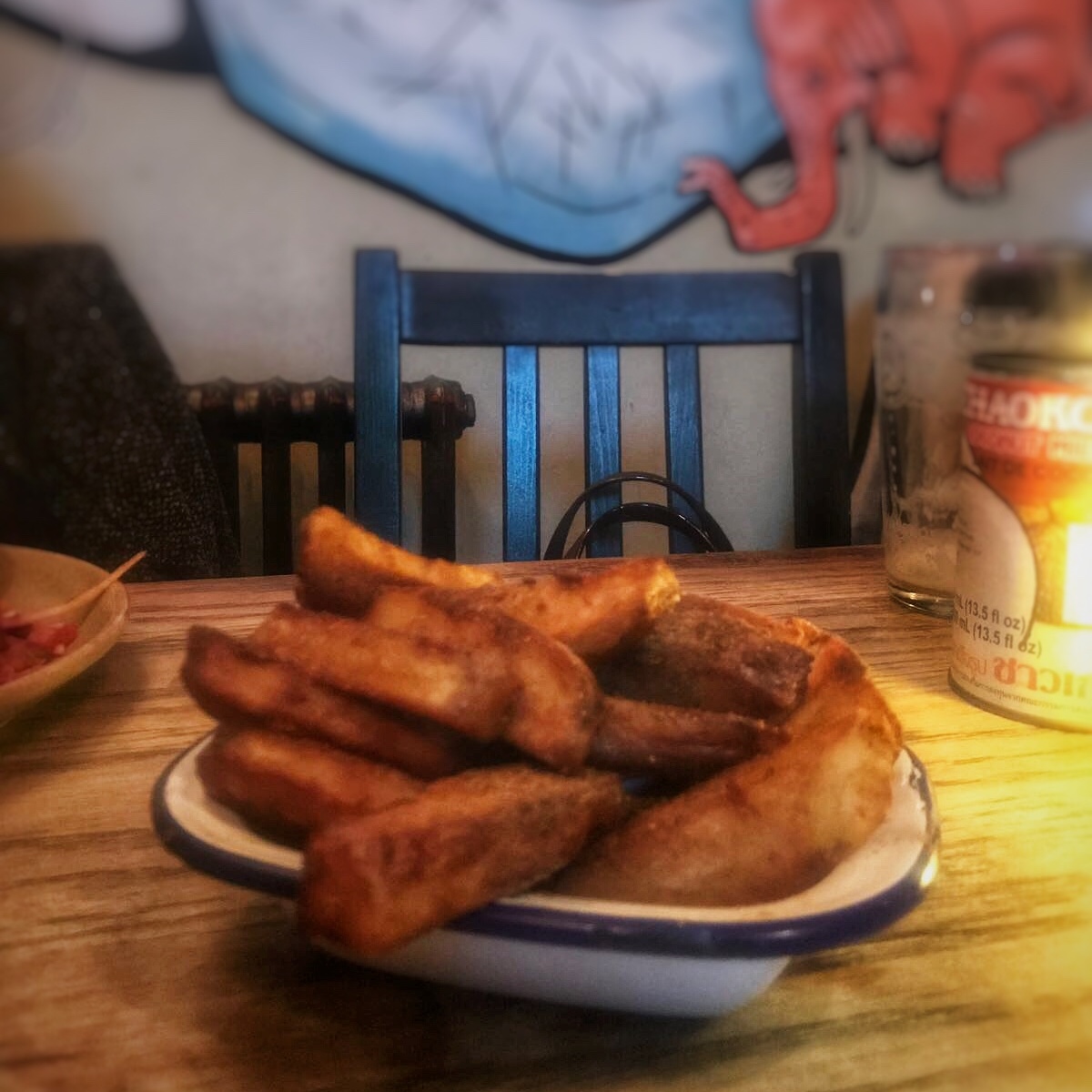 Next up is probably my favourite thing about Crossing the Rubicon; the masala chips. I feel like a bit of a heathen for saying my favourite part of a dinner is the chips but these chips are on another level. I don’t think I’ve felt this strongly about chips since the first time I tasted salt and chilli chips; chips were never the same for me after that. Now if they’re not seasoned or loaded or something I feel betrayed by the chip maker.

Think of masala chips as the Indian equivalent of salt and chilli chips from the Chinese. Delicious chips packed with flavour you could never expect when you look at the bowl placed in front of you. A word of warning though, they are tremendously moreish. We ordered a bowl to share between two and it was the perfect amount as an accompaniment to the meal. 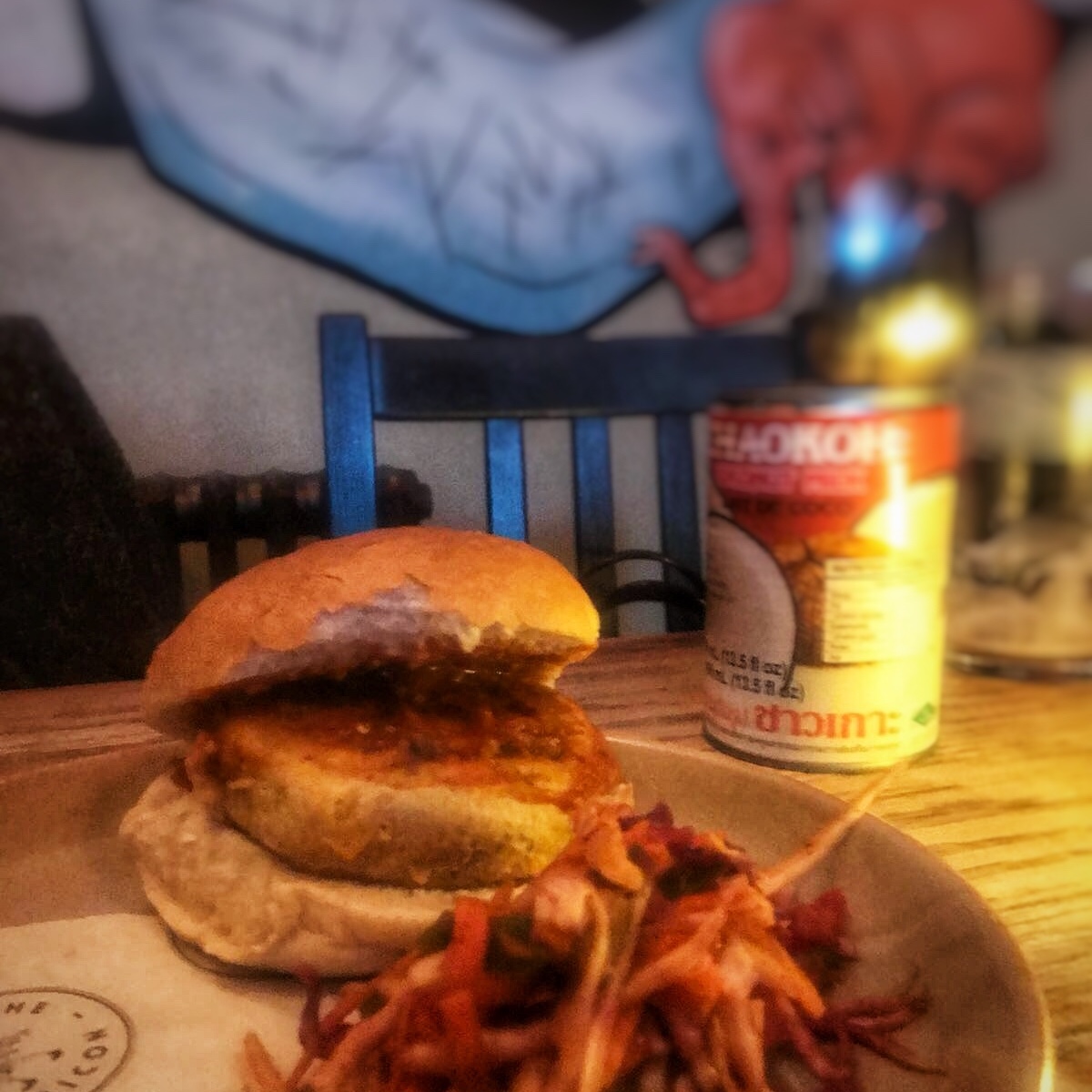 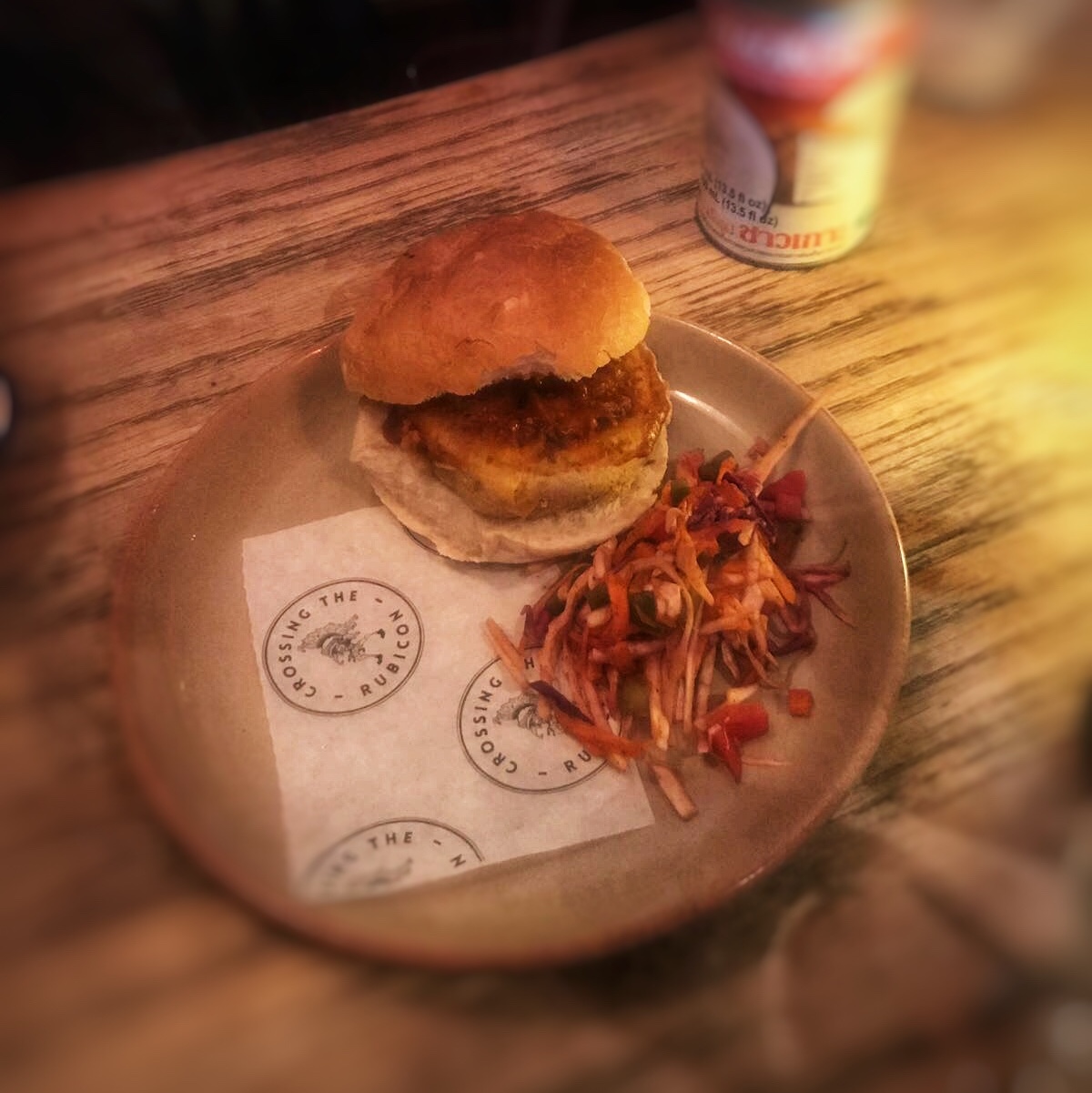 If masala chips wasn’t a step into the unknown for you then lets try the vada pav; a spiced potato burger served on homemade pav bread with crispy chilli and more of those delicious chutneys. Now regular readers may be thinking what’s this? Where’s the burger or steak or chicken? I always hark on about regular readers, wonder if I actually have any? Anyway I digress again, this is indeed a meat free dish which I’m certainly not renowned for ordering.

But it’s delicious. The homemade pav bread looks reminiscent of a crispy morning roll but it’s so much better and as a bonus is in fact crispy! You can’t beat a crispy roll in my opinion, unless its a brioche bun with a burger! The spiced potato burger is great though, I like my spice and this packs a nice little kick as well as really complimenting the pav it’s stuffed inside. The crispy chillies also add a nice texture contrast against the softer burger while adding a little more heat, definitely a winner for me! 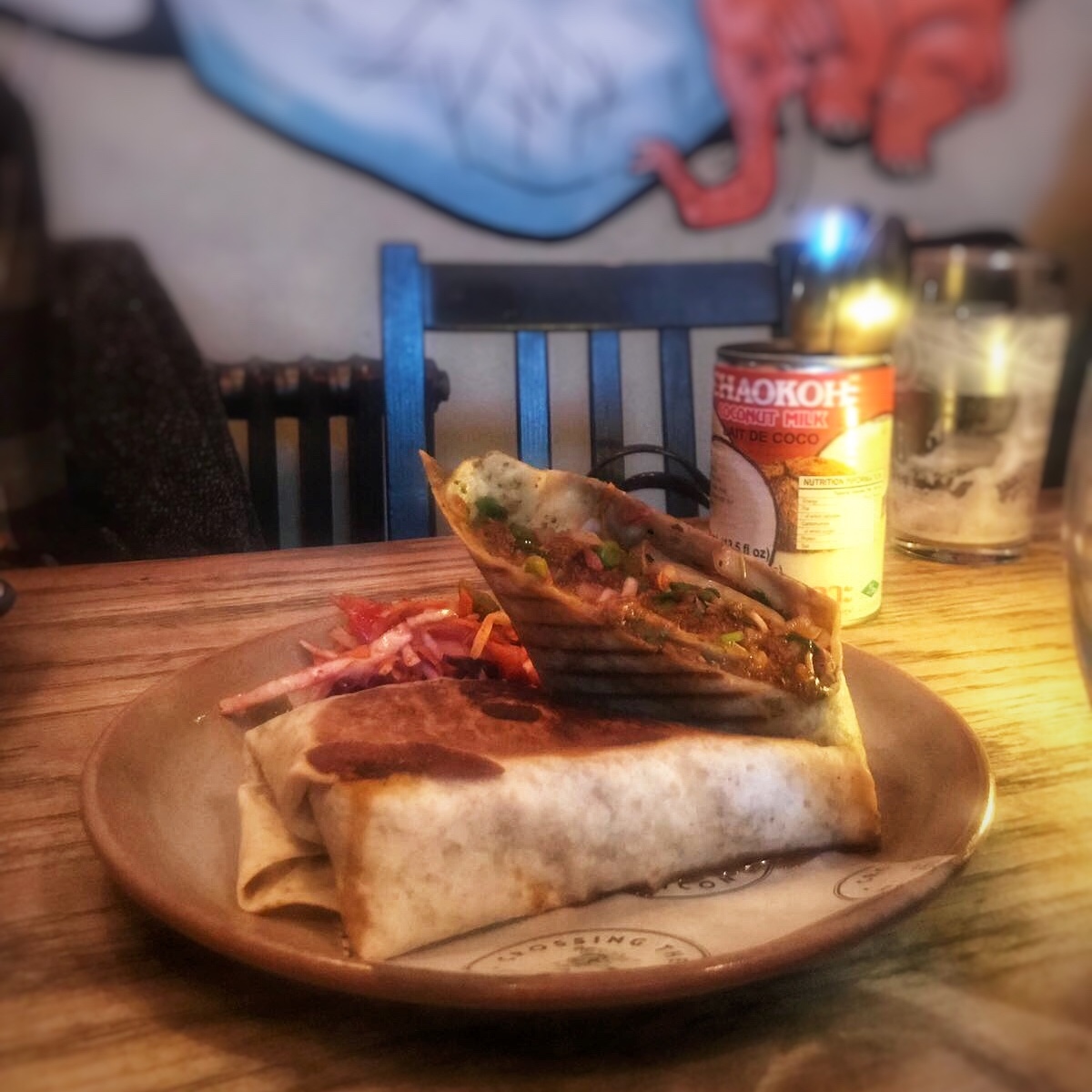 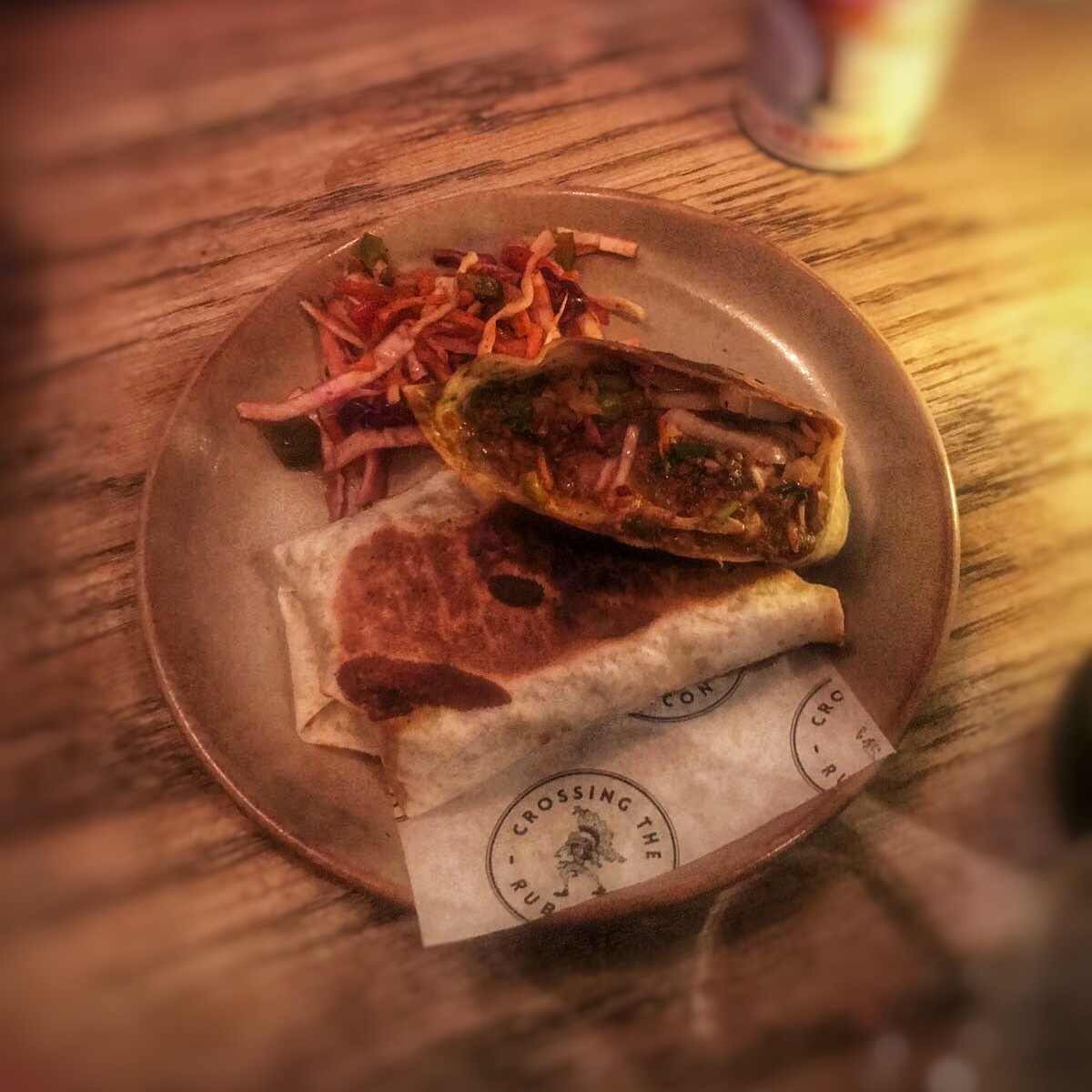 Moving on to something a little more in my wheelhouse it’s the Rubicon frankie; curry served on a chapati with cheese, red onion, tomato, coriander rice and salad. Once they do that they roll it into an Indian-style burrito and voila! There’s also a choice of curries so you can try different ones or see what tickles your fancy at the time. You can choose from lamb keema, chicken tikka masala, chickpea chole and vegetable bahji.

We decided on the lamb keema which was minced lamb, peas onion and garlic, ginger tomato and chilli. I’ve never had lamb keema before but I’d definitely have it again, this was a great curry. Packed with flavour and it also worked really well in the chapati. Though if you put anything in bread and add cheese and serve it to me I’ll most likely love it! The Rubicon frankie epitomises this menu for me, it takes something you’d find at your local Indian but then flips it and does something with it that completely changes the curry image in your head. 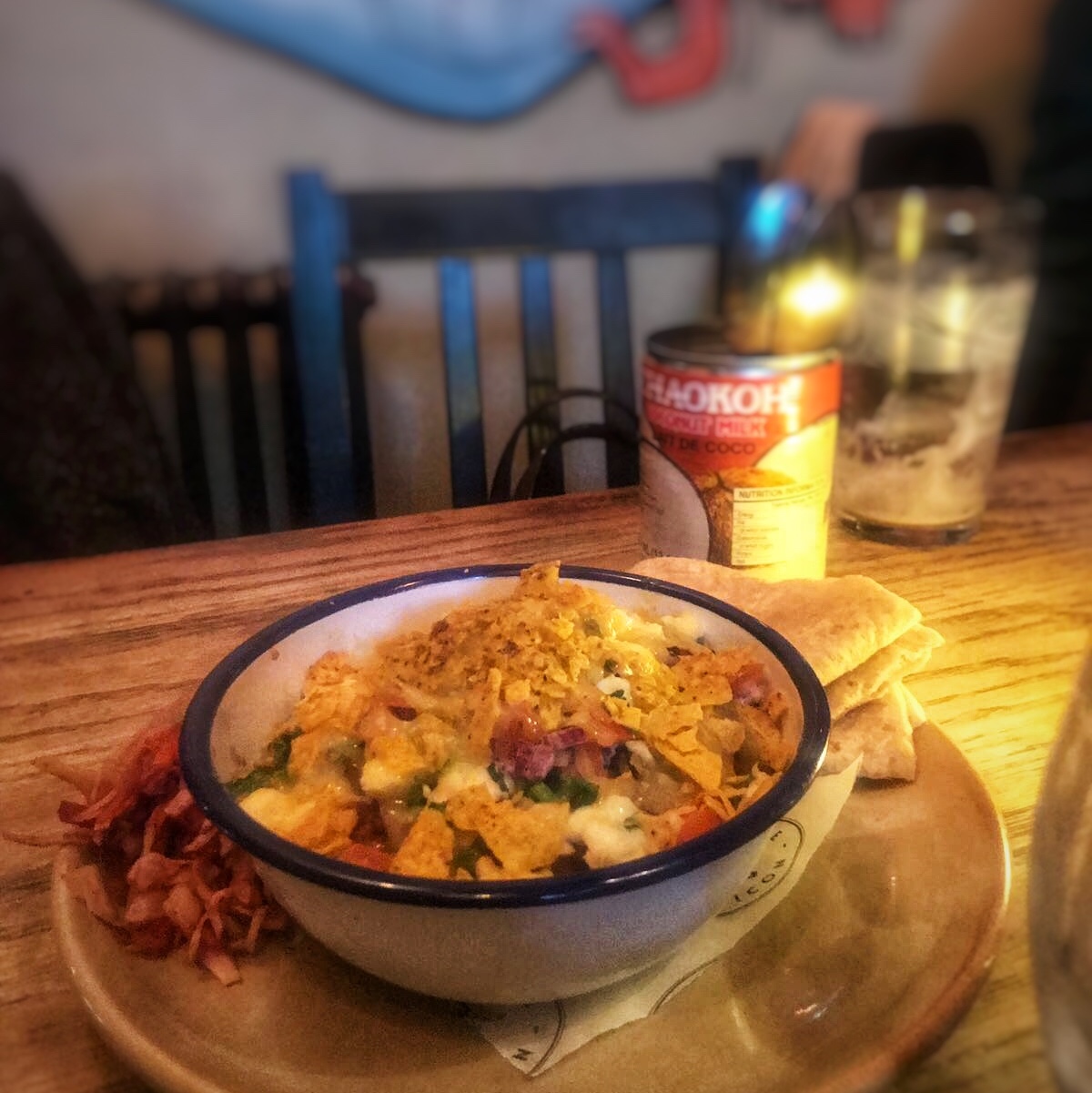 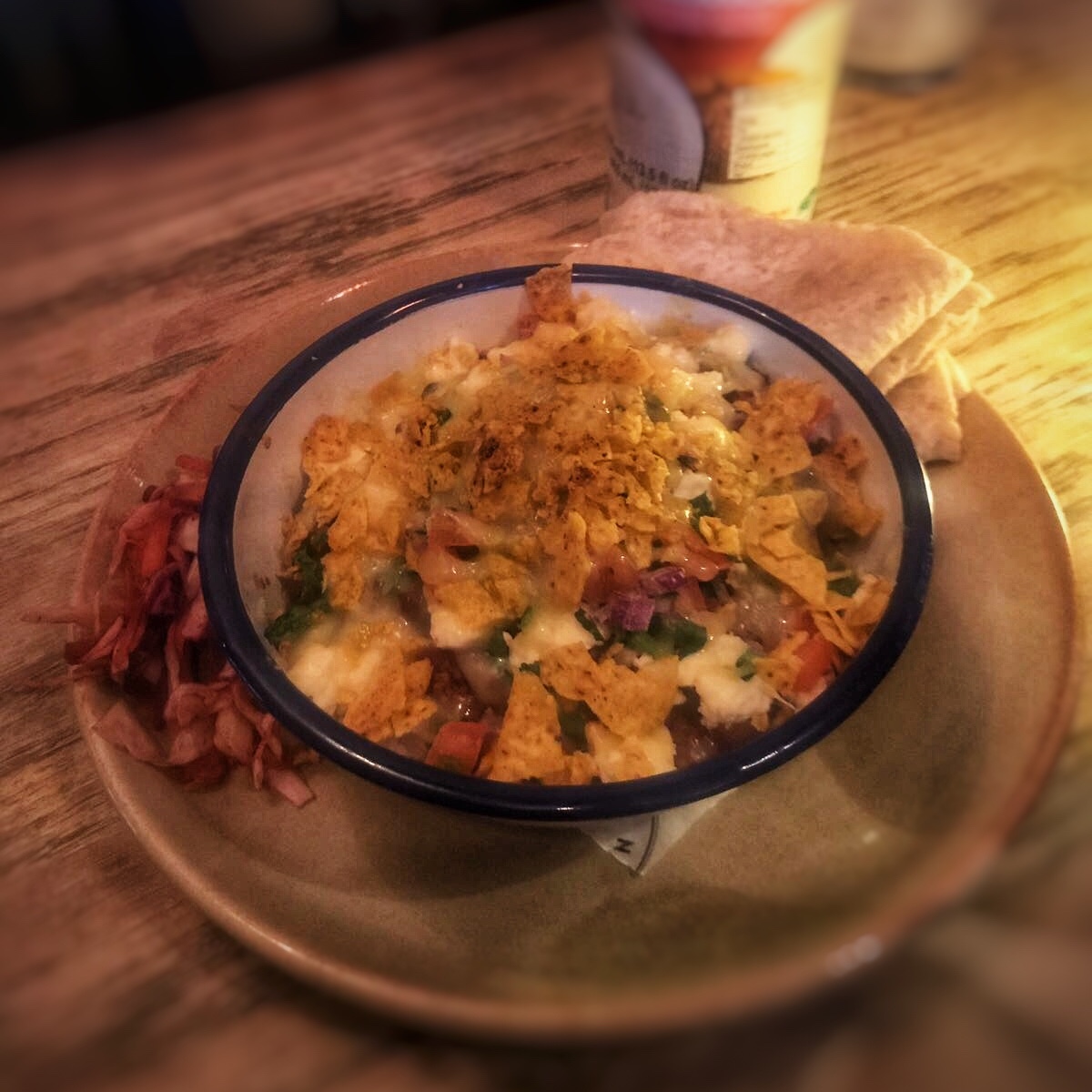 Last but certainly not least on this voyage across the Rubicon menu (see what I did there?) was the Rubicon chilli. Now I know what you’re thinking, chilli isn’t an Indian meal and I’d agree with you. But when a restaurant wins the Lupe Pintos’ Great Western Chilli Cook-Off you can bet your ass I’m going to try it! You’ll have to forgive me for being scant on the details for this one, award winning chilli recipes are often, and rightly, a closely guarded secret.

What a chilli though, I mean it was epic! I like to fancy myself as a good cook and maker of a mean chilli but this put me to shame. There was such a range of flavours and textures that all just melded together and created this great dish. We had some paneer crumbled over the top and there was crushed nachos too! It’s all served on a bed of rice, deep down at the bottom of the bowl which soaks up all those lovely flavours as well as a chapati for getting in there and scooping it out. I loved this dish!

So there we have it, Crossing the Rubicon revisited. There may be a new menu but for me it’s the same great joint that’s one of my favourite places to eat in Glasgow. If you haven’t tried it yet then I recommend getting down and changing that soon! They’re also knocking out some pretty fantastic looking specials these days as well so be sure to keep an eye on the Instagram for those!